it is indeed as the title reads.. 👍

Red ticket Sirloin steaks .. Very nice indeed..  And we haven’t had steak for a while..

Trimmed a little of the fat.. OK OK stop shouting! Yup we all know that fat is flavour.. Yet these were red ticket a few days back.. So the fat needed a little trimming alright? ✌️ 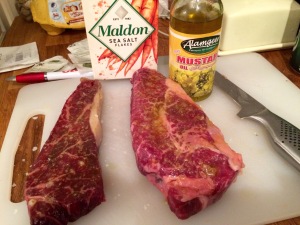 Cooked in the iron pan real hot.. Like fill the kitchen with smoke despite having both sets of doors open hot..

Some butter at the end for flavour..

And fry off some good French fries dusted with Piri Piri seasoning ..

Fried of course in straight up Mrs Middletons oil with the aid of Uncle bens wok..

The peas are simply boiled and buttered..

For Mrs Fitz.. Lots of French mustard with horse radish.. 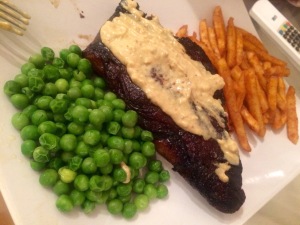 I prefer mine on the side.. 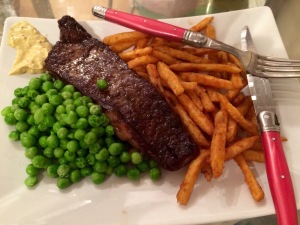 Such a simple thing.. And great when done well.. Ahem… 😉