We dig pot stickers.. And I know my good pal Ramsay delights in them.. Although these are just for us!  Soz Rams!

Now I am sure that if you do these often enough you can get a speed on.. I don’t.. So this takes time..

Starting with the filling though.,

Pork of course! Although any animal will do and with the game season now in full swing I am expecting to make these from some ‘exotica’ soon💥 although I must freely admit that shrooms or just pure veggies would rock out here too!

Rind removed .. And a small piece of the fat.. 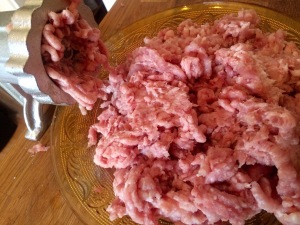 And then the additions..

Green onions .. For bite and flavour 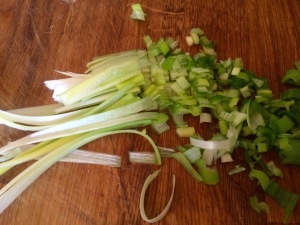 A few water chestnuts for crunch ..

That’s all mixed up and popped in the fridge to get to know each other a lot better..

In the meantime make the dough.. I decided after normally buying the wrappers that they must be easy enough to do..

So I thank the google gods once again, although not finding a definitive recipe I took ‘inspiration’ from many..

Two cups of plain/ap flour. And about two thirds of a cup of boiling water.. It has to be boiling.. You could do this by hand perhaps using chopsticks to mix it.. Yet feck it. Do it in the processor.. 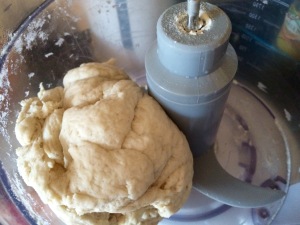 Let that dough rest .  I am no scientist yet there is reasoning behind this..

Then cut into bits.. Lots of flour to prevent sticking..

And roll out thin and smallish.

The filling placed in the middle and an attempt to fold them over.. Sticking them with water only.

Do they win first place or even third in a pretty comp?

Yet into the pan first with a spritz of mrsmiddletons straight up oil .

Then hot water added.. And a lid popped on..

The water disappears.. And you have pot stickers! Crispy on the bottom.. Chewy on top.. Darn tasty filling!

To go with a lip smacking slaw of mooli, pink onion, heritage carrot, cabbage and an apple.. All drilled through the processor with a pinch of cumin seed a splash of cyder vinegar and a sprinkle of seasoned rice vinegar.. 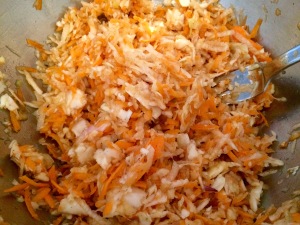 Then ‘artistically’ plate up.. 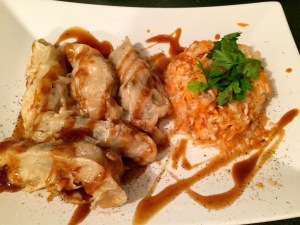 Must get quicker at em though..

Like Loading...
‹ Puccia salad burgers with sweet potato fries = speedy easy supper!
Irish buttermilk soda bread , so simple indeed! You need this in your life or kitchen at least!  ›