Home › Dinners/Suppers › It’s official we are chickened out

It’s official we are chickened out

Like there should be a memorandum or decree drawn up.. Signed by all parties.. (Well me and Mrs Fitz anyways..)..

We have eaten enough poultry to last a good while now we reckons..

With all those spatchcock numbers in quite a quick succession.. All doozies by the way.. Each flavoured differently..

It’s been good times.. Yet good times have to end sometime.. Today it ended..

It started with wanting to make haggis for burns night, yet not getting to the butchers to be able to pick up the necessary meaty goods..

Then after visiting three very well known food stores in the part of town we were in.. And discovering that the first didn’t sell joints of beef of any interest.. Yet did indeed sell lots of ready meals.. The second only sold frozen ready meals at a far reduced price than the first store.. And the third.. We couldn’t even get near to third.. They were queuing to get into the car park..

So where did we end up? Waitrose of course!! Right on the other side of town.. Yet they must have a beef joint of interest right?

Well possibly not too wrong yet there was no way I was going to part with that much money for a hereford one bone rib piece.. No way Jose..

This time a butter made to go under the skin.. A butter of white thai pepper, salt, lemon juice, porcini powder, black pepper, olive oil, and lebanese herbs ghormet sabzi .. 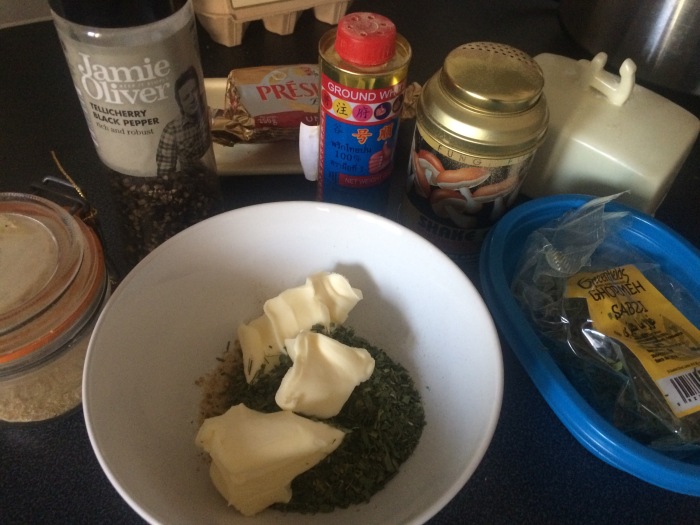 Stuffed under the skin.. And smeared all over.. Back into the fridge to harden up again.. 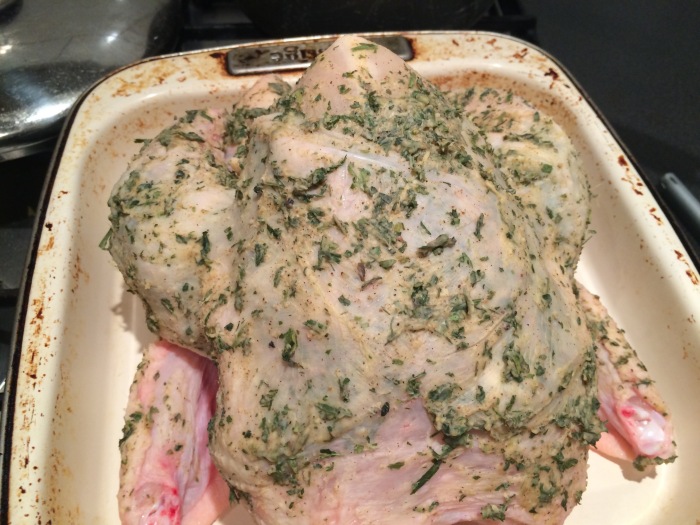 Meanwhile the veggies got peeled diced and chopped.. 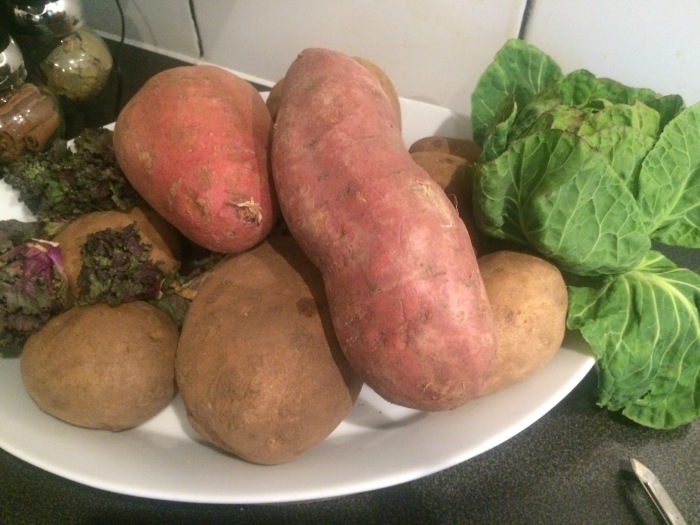 Sweet potatoes boiled and mashed with butter and thyme.. Swede mashed with more butter and seasoning, sprout tops put with kale buttons and sweetcorn.. (Half a tin needed using up its bin day ..).. 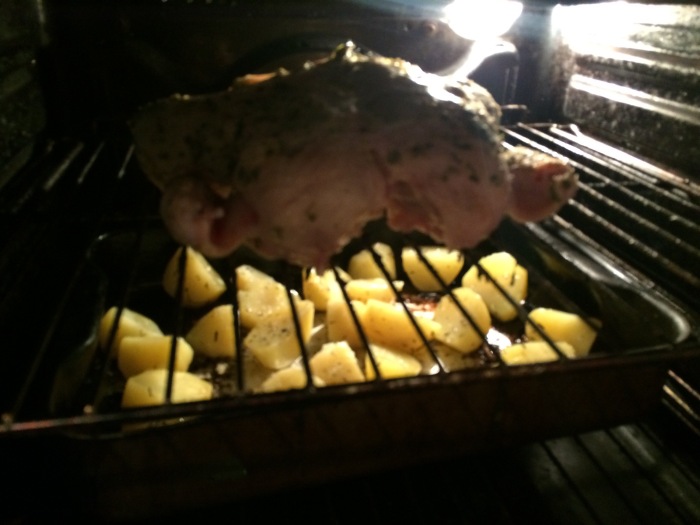 The chicken balanced on the bars above..

Chef ping can deal with the reheating of the veg later..

A gravy made too..

And an attempt at mystery sausages (turned out to be those chinese flavoured ones..).. Toad in the hole.. I swear I followed it right, ok maybe I don’t follow anything.. Yeah.. That’s actually what happened..

The sausages cooked in beef dripping.. 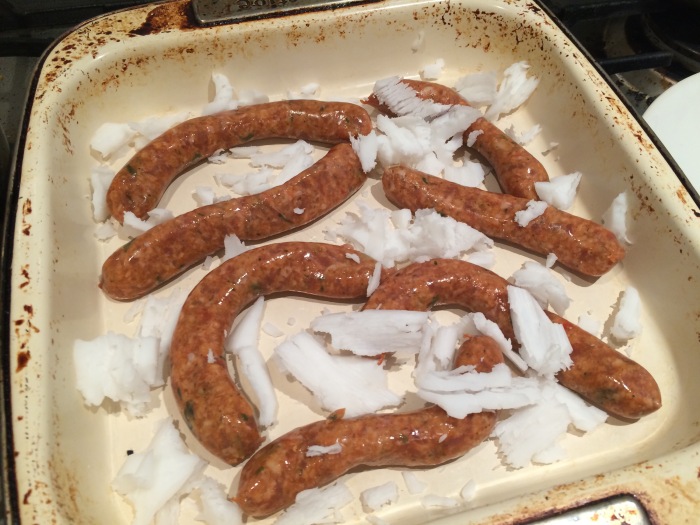 Yorkshire batter added to the tray.. 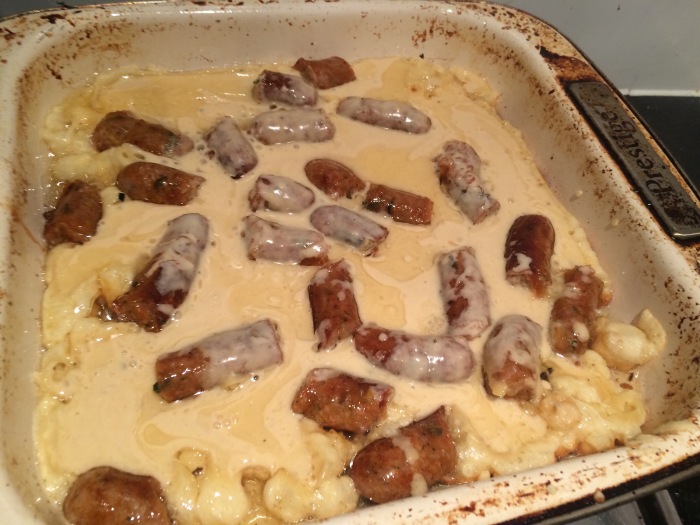 Not much rise from them..

The spuds were good though! Although did the Jamie Oliver pressure squeeze on them.. Sorry it doesn’t work.. 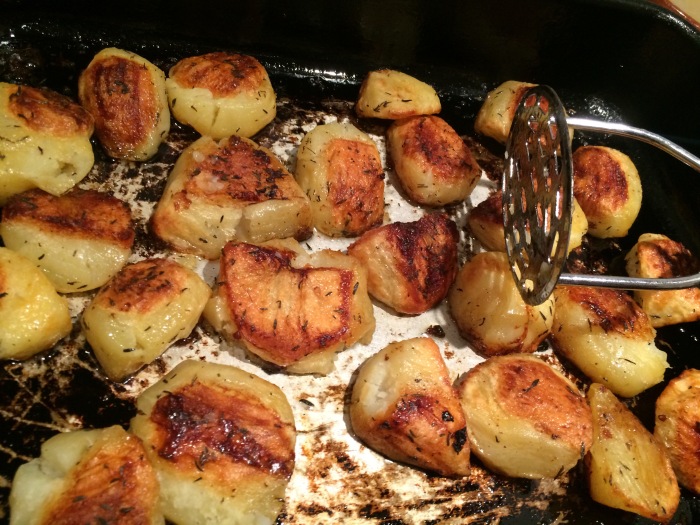 Nice spread in the end though.. 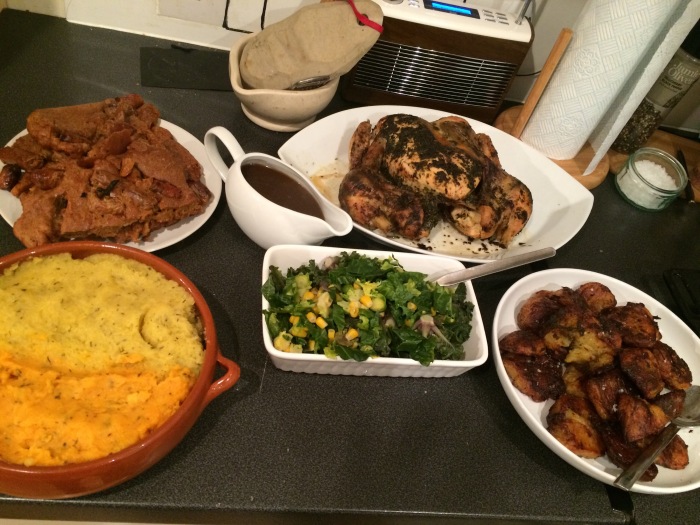 No more chicken.. Not for a while anyway..