On extremely good advice from a good pal .. Me & Mrs Fitz took supper at Bubbys here in New York..

We took to the one in tribeca, and it was a great choice, this joint has a great feel to it from the moment you walk in.. Ok they sat us in the middle and I normally hate that! Yet it was cool on this occasion.

I was very pleased to read that they really are sticking to their ‘values’.. (Or at least seem to be .. I really hope that in this case all you read from them is at least seven eighths or more is the truth. Because this is a nice story in a world of cost effective catering.

They make their own sodas and are due to open a great d fashioned soda place as part of their joint on the highline. That will be very cool yet we won’t be here for that experience. So I took a lime soda whilst choosing supper.. Made with cane sugar and fresh limes it was good .

Didn’t bother with starters and went straight for mains.. Therefore allowing a couple of desserts right?

Mrs Fitz took their burger and fries.. And a side of coleslaw.. And proclaimed that it was in the top three burgers she had ever eaten if not the best! (Even beating mine!! Sheesh!).. I have to admit it was a very good looking burger and from what their menu states they buy whole beasts.. As well as their own pigs.. Of which they render their own lard for the biscuits and pies.. I think they started as a pie shop..

So with a statement like that it could only mean one thing..

Bubbys pit selection.. I went for pork ribs and brisket.. Both smoked in house? Over cherrywood. Was it good?

It was ok.. I have to admit on eating better.. It lacked fat=flavour.. Shame in this current fashion of trimming off the fat? No?

However they did make up for it with the biscuits .. They contained the lard and you could tell.. I could devour a plate of them .. Delicious indeed!

Also had collard greens with home made bacon. They could have done with a little more draining to be honest.. And a side of what Bubbys decree as the best ever baked beans.. Ooops! I think chef ping ping was involved here.. A little on the dry side yet homemade for sure .. And went great with the biscuits !!

Am I being unfair? I don’t think so.. Am I still enamoured with the place? YES INDEEDY.. !

So let’s go straight to dessert., had to order two.. Key lime pie.. Tasty.. Zingy and fresh .. The star? (Although am again convinced that chef ping ping had an evening shift here?)

Sour cherry pie.. With full on lardy pastry. This would bulk you out fast!

I would have liked a single scoop of their homemade ice cream with the pie. Yet it didn’t arrive with any. Boo..

Some other nice touches though.. Good art on the walls, a feel that the place is welcoming and ‘local’.. The glasses for drinking are jam jars.. And the staff very friendly and attentive..

The cost was not too bad either .. 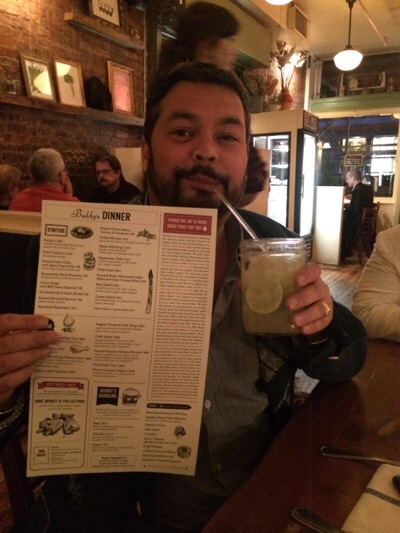 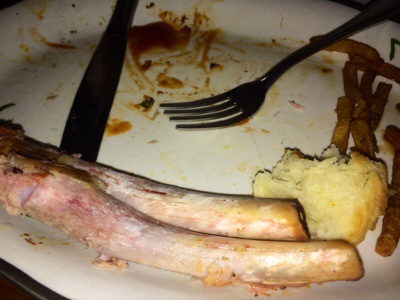 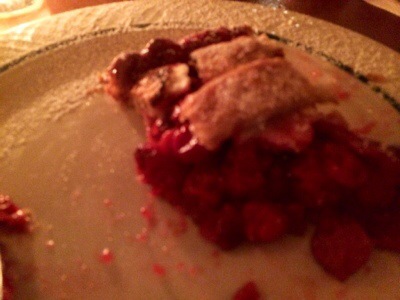