I was thinking about what it would taste like to put turkey, stuffing and cranberry sauce together in between puff pastry .

Why was I thinking this? Dunno.. Just was. It gets that way sometimes!

Anyways decided that the only way to find out was to just make the darn things!!

First I hunted down some if the turkey sausages hiding in the depths of one if the freezers. Tricky buggers to catch these.. They had managed to nest under a pile of pheasants .. Caught them though!

Defrosted, de skinned and crumbled up.. Mixed with the stuffing mix.. Classic sage and onion.. Smushed up into a ball.. Right that looks pretty ok..

Store bought pastry. Although I AM thinking it’s about time I made my own.. Maybe next time.. Hmmm

Pressed out the turkey and stuffing mix onto the pastry.. Smeared with cranberry sauce.. Rolled up .. Brushed with duck egg .. Popped into the oven at 210 ( real money) degrees..

When raised and golden.. Taken out and put to cool on a rack ..

They tasted pretty good! Ok not quite what I was thinking of .. I was definitely thinking of something more turkey-stuffingy-cranberryish.. Yet hey! Good enough!

Dropped some over to a pal.. It was his birthday so that’s a nice treat I reckons..

Think that one needs some more thought.. Hmmmmmm 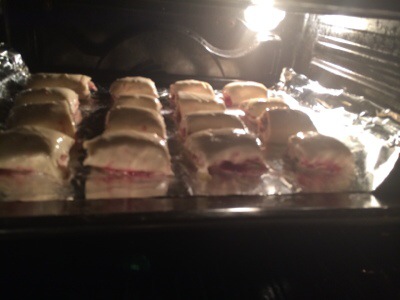 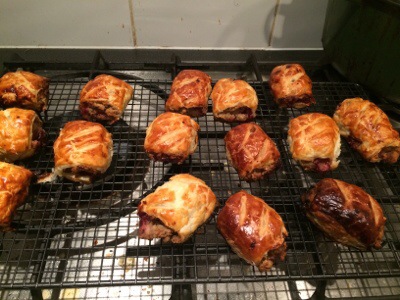