This form Jack.. it’s good timing considering our weather.. the cold is for sure rolling in.. now I don’t count pigs cheek as Offal.. is it? I like em!

What a terrible pun. However I saw a pack of 4 pig’s cheeks in Waitrose and decided to have a go, never having eaten them on their own.

Oh yes I included them in my brawn (see previous post). Found a recipe on the Internet which actually used Waitrose ingredients so I had to try it.

I searched all over northern Milton Keynes for streaky bacon without success. Eventually got it in Waitrose.

Put the bacon in the pan and heated it till the fat ran, added onions and cooked till soft and browned, added some mushrooms and cooked the mixture till the mushrooms were sweated and slightly browned. Removed from the pan.

I then tossed the cheeks in seasoned flour, added good olive oil to the pan and browned them on both sides and again removed from the pan.

I then added a good glass of red wine and reduced it, stirring constantly, returned the cheeks and onion mixture to the pot and topped up with enough water to cover.

Tasted the liquor and it tasted like dishwater so I added, stupidly as it turned out, some salt (we talked about that Jack!!! X) and pepper and simmered for an hour and a half.

Not long enough so simmered for a further hour.

The cheeks just melted but very salty, shouldn’t have seasoned before braising. Otherwise a beautiful meal. Will definitely make it again.

Offal is definitely not Awful!! 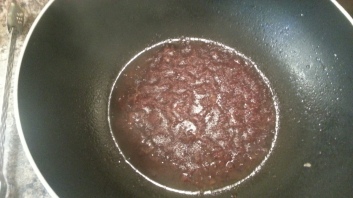 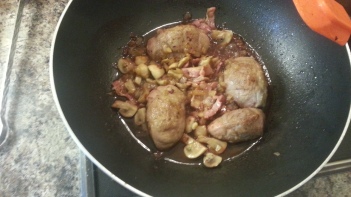