Got this mail from my Pal Jack..

Are any of Heston’s ‘consumer’ foods any good? We have tried a bunch of them.. and always been disappointed!!

This weekend I decided to cook the famous Heston’s traditional beef and dumplings using the recipe card displayed in the supermarket.

I noticed that there was lots of ingredients so back to Waitrose to buy a pack of his finishing jus for beef and Mushroom Ketchup (tastes horrible on it’s own). The rest of the ingredients I had in my store cupboard or growing in the garden.

So here is what I did. First I decided to ignore his instructions to use a casserole to cook the meat in the oven for 2 hours then to fry the veg, sauces and herbs for another half an hour.

Guess what I did instead!

The pressure cooker of course. Also since I was only cooking for 2 I used half the quantities and therefore left out the minced beef and halved the other ingredients.

So here we go:

First browned the beef and onions in the pressure cooker. Then added red wine, his Finishing jus for Beef, self assembled bouquet garni, a star anise, a sliced carrot, quartered mushrooms, some tomato puree, about half a cup of passata, a tbsp of dijon mustard, a dash of Worcestershire sauce and a large dash of Mushroom Ketchup. Whew! (phew indeed Jack!)

During this time I prepared the dumplings by mixing self raising flour, thyme leaves, finely chopped chives and parsley, dijon mustard, salt and lemon zest until it forms a crumble. I then added about 100g of shredded suet and milk.

Continued to mix until the dough comes together. Left it covered in the fridge until ready.

Rolled it into dumplings, fried them in butter for 3mins, added them to the stew in a casserole and cooked it for 25 minutes in a moderate oven.

Knackered so poured a large glass of ‘Taylor’s Ruin’and sat down until ready.‎

We didn’t like the dumplings but the stew was very strong but delicious.

Will I make it again? Doubt it. 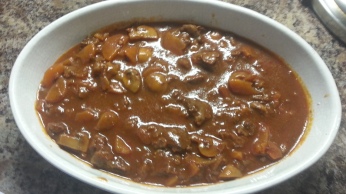 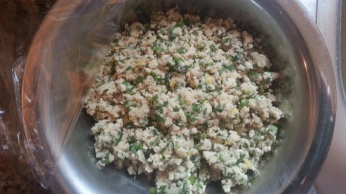