It’s good to be back in the kitchen cooking.. As nice as it is to be terribly spilt with all the choices in the world it is so so nice to be cooking again.. And with thinking to do ( I think best when cooking, even better when making sausages)..  https://cookingwithmrfitz.com/?s=Sausages&x=0&y=0

Yet the following dishes helped me think some of the things through that I needed to thunk about!

Now the other day I read a post by a blogger pal .. Where she popped the onions into the slow cooker to meld down for French soup.. Hmm says I.. Will that work as the base for a curry? So onions chopped and French fat garlic and grated ginger into the crockpot.. A little sunflower oil too.. And five hours later I think they are pretty good.. I think there may be something in that.. I might even do a big batch over the Easter weekend and freeze/kilner jar them? Hmm ( more to think about!)..once melted down I added in dried fenugreek and the sharn family masala mix.. 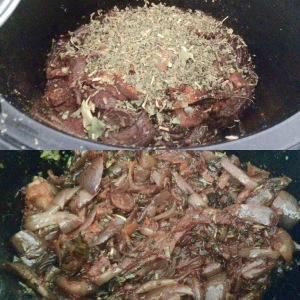 Skinning and chopping the chicken up.. The hounds had the carcass chopped up as they stared at my ‘creative butchery’.. 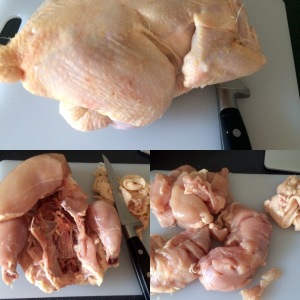 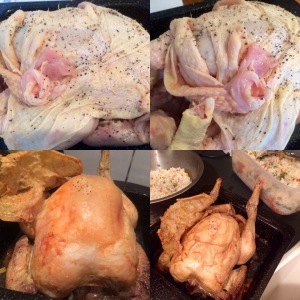 They were very happy with that and their mixed veg rice! ( who wouldn’t!)..
The curry gravy made simply by ramping up the chickenyness with chicken stock..

Chopped white potatoes added.. And kitchen king masala, water and frozen peas and boiled down.. Now that is a delicious dish on its own!

And the breads.. Shallow fried greatness! I simply adore pooris.. And consider them a rarer treat than a Cuban cigar!

Simple dough of chappati flour and water.. Then kneaded rolled out and fried.. pooris rock!

The rice was some stolen off the hounds freshly cooked pot.. With some pre cooked crispy onions sprinkled over.. Very tasty!!

The black pepper poppadoms were toasted on the direct flame on the gas.. Lovely that way.. You get little spikes of burntness!

No final shot .. Must have deleted it..

So let’s look at the fire again huh?

Like Loading...
‹ Apologies for my absence ! It’s been a while.. Ok just a little while!
Easter BBQ time (first of the year) ›