I went on a mission for supper tonite,

A proper mission.. It began with concierge.. And trying to fix a reservation at a restaurant that my attorney recommended.. It didn’t happen .. They ate just too full, you see in Lisbon this weekend is not only the champions league final yet also a massive concert called rock in rio.. The Rolling Stones are even playing.

So the town is pretty darn packed to be fair.. And will get even busier tomorrow and the next day..

Without a dinner reservation and dining alone I had to decide on something.. Fortune favours the brave right ?

Having decided that I would treat myself to suckling pig that’s what Carla the concierge had a search for. A bunch were full yet Carla was sure she had found one .. Funny really is google the ultimate concierge? They all seem to rely on it.. What happened to the good ol’ physical network???

Still we seemed to have a plan in place.

I also asked that my request could be written in Portuguese ..

And the restaurant was called ‘solar dos leitauo’ ..

Any gooey eyed deers yet?

Ok.. Next thing you need is a taxi driver.. And in hindsight one that spoke even had smallest of English may of helped out a bit.. Ahem..

Oh and one that didn’t keep bumming cigarettes off you while driving round and trying to find the place..

We got along though. That universal language of laughing and shaking the head in the right places .. We swapped swear words . Had seemed to have a genuine interest in the ‘harder’ variety!

Finally finding the place through roads that the door mirrors had to be closed for they were that tight!. Pretty hairy scary ride to be honest..

And this was proper in the depths of the backstreets. Like in deep!

Yet we found solar dos leitauo.. only problem is…

They are a fish specialist.. And that ain’t me! I am positively sure that it would have been a most magical meal if you dig that kinda thing.. yet not tonite Josephine !

Worked it out yet?

Yup.. It’s the suckling piggie.. Portugal has to be one if the best places on the planet to enjoy this and I apologise in advance if you are not keen.. I am.. And it’s now my mission ..

Good thing the chef at the wrong joint spoke a little English and laughed at my bad attempt at reading it aloud.. Turns out that yes indeedy the place had the right name , leitauo.. The suckling pig. Yet it is in fact the family’s surname! Who would have thought that!

He does though know where the best suckling pig is available though..

So after he briefs the driver, (who by this time has almost chained half my pack.. ) we head off again.. At quite some speed!

Favour fortunes the brave right? So let’s be having it..

We finally get there probably breaking a heap of traffic rules along the way . Heck not me driving..

And we arrive .. The pic I took makes the area look a lot better than it felt for sure !! Wowsers ..

The place is called marques de Palma .. And it specialises in suckling pig.. As well as a dazzling and mind bending variety of shell fishes.. The barnacle things in the photo I cannot remember the name of yet do remember watching a show where they were getting them by hand off the rocks.. jumping in and out of a crazy tidal sea.. Goose barnacles? Is that it?

Off the driver goes.. His pockets decidedly heavier.. His lungs a lot fuller. .. Coughing as he waves and grins a happy from if someone who try has helped someone get what they been looking for.. He could see if in my face .

Ok.. I am in.. Aha. The blinkin language barrier again., yet it’s cool.. I try reading out my Portuguese request again. Ending up just giving him the piece of paper to read..

He looks at me a little strange.. it’s the owner by all accounts. I am showed to by table by a traditionally dressed waiter, you know the sort if thing.. Waistcoat and all. Now nobody speaks English here. Thank the godsfor global brands! Fanta is fanta..

They already have my order, so I wait. While most of the patrons have a good state at me.. It’s cool I know what I am getting for supper now. So I suck on my fanta watching the news in Portuguese .

And then it arrives . Ooh ooh ooh .

I think it looks cool indeed , and instantly the waiters and customers seem to warm to me .. A global food smile .. I gesture if my waiter can take a picture for me.. He obliges and it breaks even more ice.

In I go.. Hands tearing at the meat, I didn’t realise I wax do hungry! I have been up since pre three am though ..

It’s delicious . The skin perfect for sucking pig. Crisp yet not fatty nor greasy.. The meat soft. The sauce really new to my taste Budd yet in a good way. Capers? Pepper ? Cant quite get it yet it works. I have decided that it must be a house sauce. Why not?

Served alongside.. Great homemade frites.. That’s the batatas fritas.. Like great crisps.. Unsalted and fresh.. Could eat loads of them! A salad that actually tastes of salad . Dressed really simply with olive oil and vinegar .. It’s great eating . Not just because of the journey . it really is delightful.

It beats me in the end.. Or do we just both decide that enough is enough?

Yeah.. I’m going for that instead..

A glass of very nice white wine and a dessert of a pingu ice cream.. Do long because I think that scooping the creamy brains out of a penguin is quite suitable to finish this dish.

The price was amazing value .. Like really really amazing!

If you come to Lisbon you have to try this place . I promise you .

( think the pig has sent me a little mad though!) 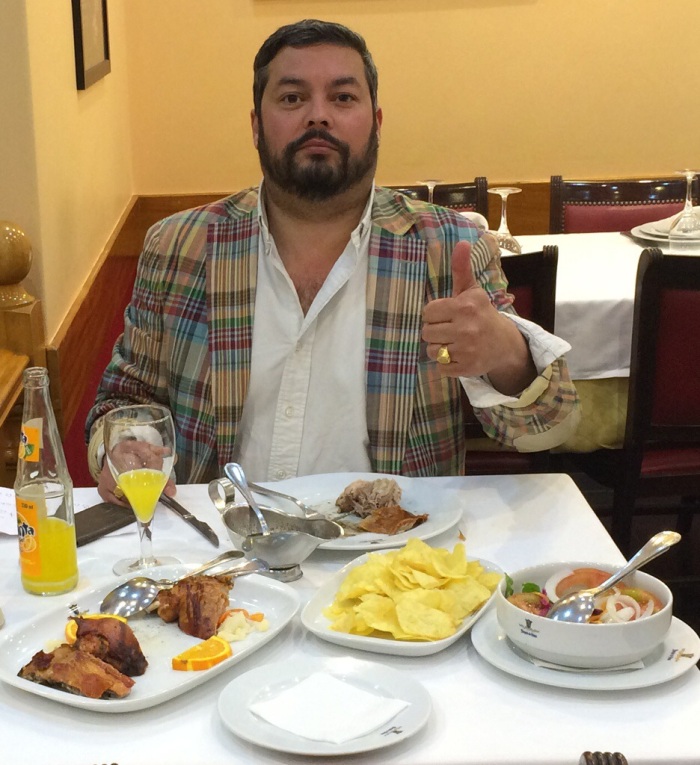 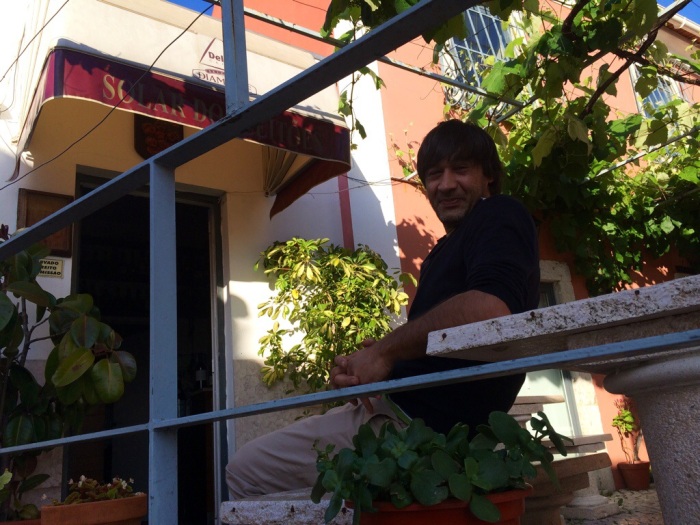 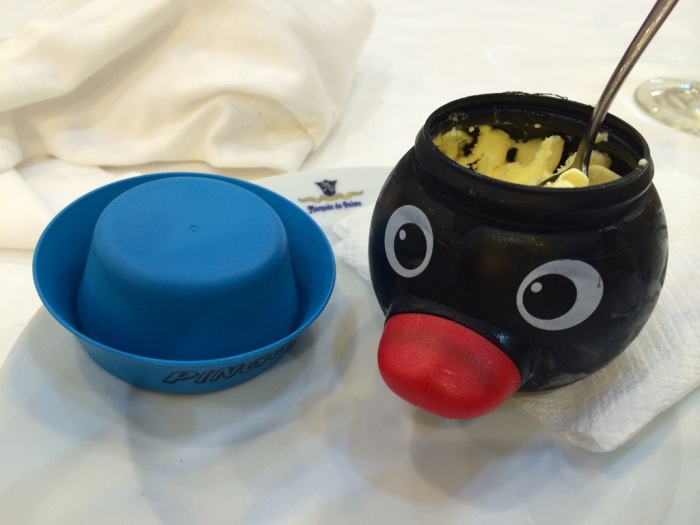 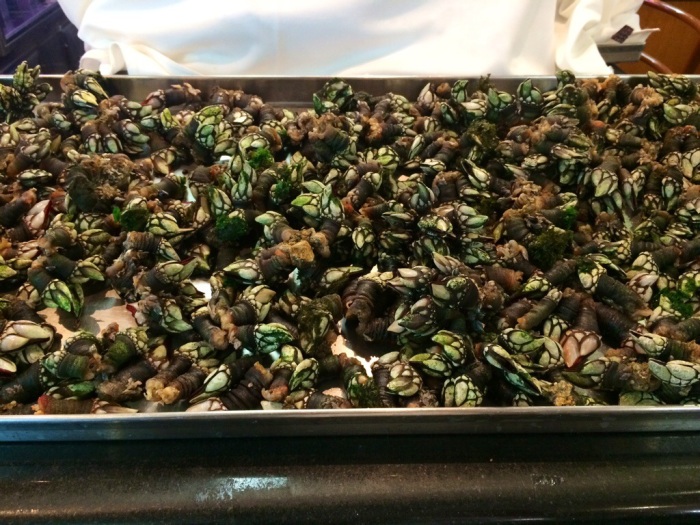 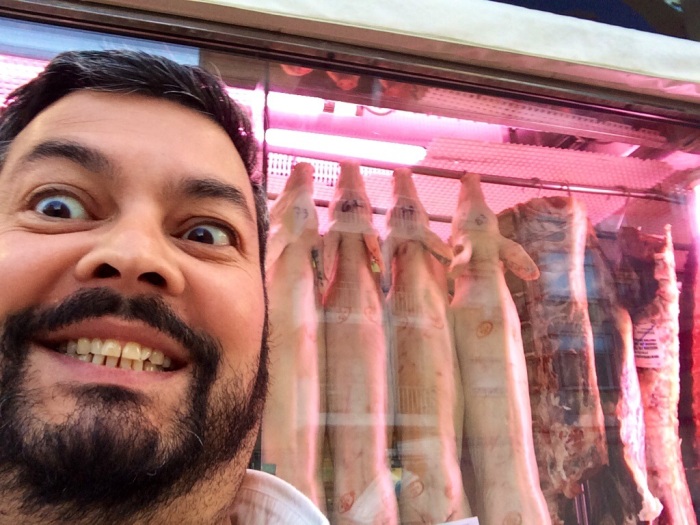 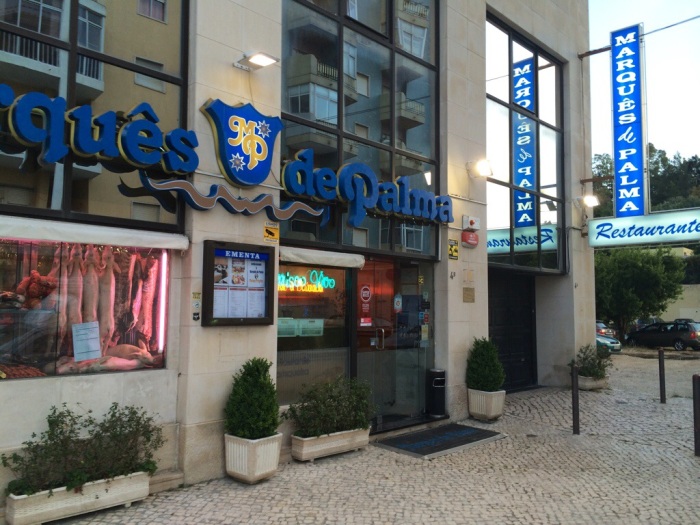 Tags: eating in lisbon, food, goose barnacles, mission, suckling pig, Travel, what to eat in lisbon, where to find the best food in lisbon