steak sandwiches .. A rare treat for us really.. Why? We eat heaps of steak..

It’s the bread.. We really don’t eat that much bread.. There was a show on telly the other day talking about the average households weekly/daily bread amounts.. We obviously ain’t average!

This read though is a cracker.. It’s French of course.. I forget the name.. It’s a long name.. Why do the French make such lovely bread.. ?

Back to the sanger though..

First the steak .. An omelette steak hehehe .. ( followers of me on periscope will get that one!).. It’s onglet or hanger .. Which in my personal view is the best steak of all.. 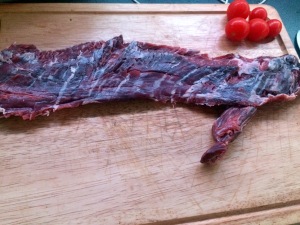 And this one is a real knarly looking piece.. All the paper like fat and stuff has been removed.. It’s been hanging for over thirty days so absolutely wonderful!

The bread is cut and most of the middley bit ripped out..

One side ‘buttered’ with hot horse radish sauce, the other with chimichurri of course! Sliced Salted tomatoes added, jarred roast red peppers, a chopped shallot and some salad leaves.. 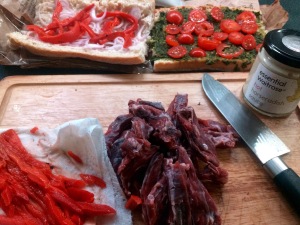 The steak fried off hot and fast.. Onto the pepper side.. 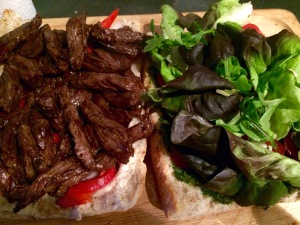 Squished up together nice and tight.. 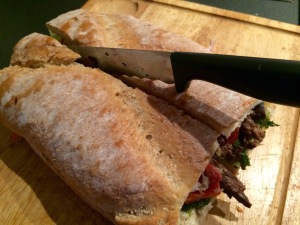 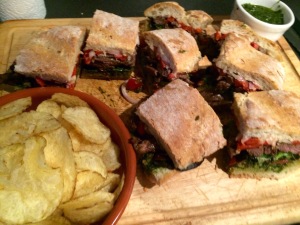 (A side of chimichurri for dipping of course!).. 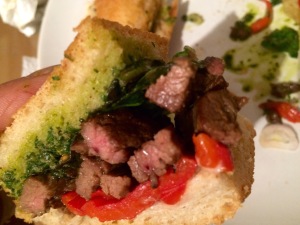