This is a lovely post by my pal Jack Taylor.. The fish reads amazing!!

I decided to have something completely different tonight for dinner.

So I remembered that my Polish son-in-law’s parents came over from Poland for my grandson’s birthday and that they had brought smoked trout from a fish farm near to where they live in Miastko.

The fish is smoked by an old lady who has a small smoker next to the farm.

I have had it before and they know that we love it hence the gift.

The only problem with trout is the bones but I have mastered the filleting of the smoked trout over the years.

The trick is to first remove the skin and make a cut along one side, separating the back of the fish from the belly using your fork to gently prise the flesh from the front of the fish pulling it gently from the ribs leaving the ribs on the spine.

The upper flesh just peels away leaving the dorsal fin on the skin.

So that’s the end of the lesson.

Having done all that I enjoyed every last morsel of this delicious specimen.

Can’t wait till they come back!!! 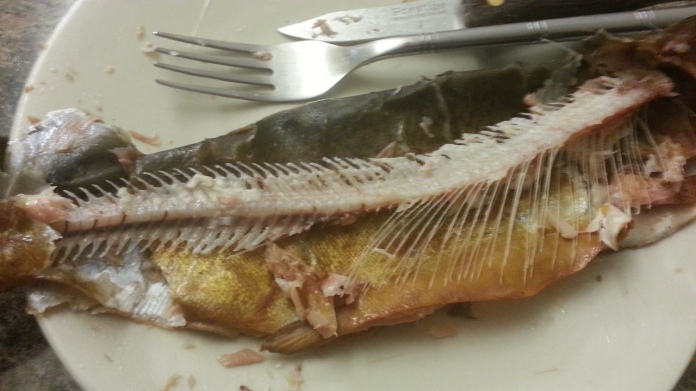