Have joined the revolution.. The Weber revolution.. Ok.. So for some this may not be so new.. Yet I have yet to have signed for the in-direct cooking methods..

Sure… I have a Dancook stalwart from copenhagen.. And its a winner, a gas outback (that thinking about it shoulda bought the one with a hood.. Yet times were harder back then.. Yet to be honest that has served us well.. I also have another un-named number with a rotisserie.. Also gas.. No lava rocks on that though… And haven’t actually given it the ‘spin’.. Still planning on that though.. Maybe this year after a long period of ownership!!

And inbetween those ones? Various fire buckets.. (One that Mrs Fitz always reminds me of the day we smoked out the street with these lamb grill stix we bought.. Wow.. They smoked!! ).. Hhahaha x

The disposable numbers.. Once almost having a small issue when placed onto a wooden pic-err-nikk bench! Will leave that to your imajo…

Remember that pee-wee herman movie? The one where you aint supposed get bike envy?

Well I had started to feel the pang rising inside .. My Attorney has had one for years now.. Stepped offa gas and often has joyous prose to tell me about the wonderful numbers that he creates.. And the ease! (Remember the smoke a while back!!) X

And a good pal.. Also already featured.. Is smashing the cuisine on the weber.. I am sold.. Well I was this morning.. Ok.. Mebbe could have got it cheaper on-line.. (Actually could of.. Yet would not have had it TODAY)

So what did I get? The weber with a temp.. The 57 one.. My attorney says that what he wished he had got.. Yet he cooks mighty fine without it!! My pal? He has it and thinks its the bees knees x

Putting it together? .. Hmmm .. Yeah ok you could say It is easy.. It is.. You do though need one crosshead screwdriver just for the handle.. Ummm and I may have assembled mine the wrong away around right now.. As you can’t use the handle to wheel it about.. Actually hands up.. It is the wrong way around.. Ok I admit a minor tweaking is required.. Post first cook I am thinking..

What else? Got a little Weber stir crazy.. Hooked meeself up with two bags of 240 weber coals.. The fire lighters (weber), and a pack of mesquite chips and a pack of apple chips.. (Ahem.. Weber..).. And the chimney firestarter.. The big-un!

Anyhoo.. Is done and up.. Have settled for a quick pint before.. MAKING MERGUEZ!!

The sausage maker arrived whilst I was away.. 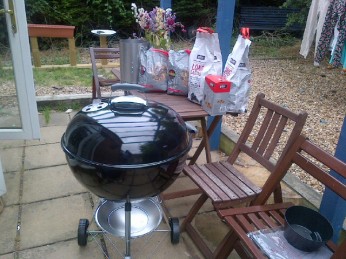