now Mrs Fitz is not the biggest fan of Chinese food and we don’t really eat it that often.. Yet sometimes when you get a hankering for summat..

And this was one of those hankerings.. And what better to make it yourself?

So here I present to you for your delectations..

Crispy chilli lamb ( the steak I planned on using was too far gone!)..

Strips of neck fillet.. Dusted in tempura flour .. Not a batter.. Fried off them the sweet, sour and damn tasty sauce added.. (Thanks uncle Ben!).. Ahem 😏

No picture.. Think I forgot..

Fresh shiitakes sizzled off with ginger and garlic paste, a can of drained bean sprouts , strips of green onions and rehydrated egg noodles.. Japanese soy sauce and sesame oil for flavour .. 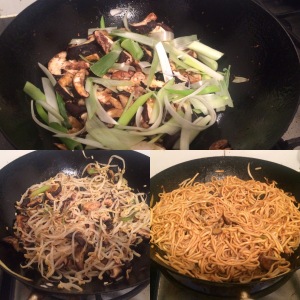 Make a batter from double dragon special raising flour, corn flour and fizzy ice water.. Loin of red ticket pork chopped up and coated in cornflour.. Not the batter and fried in straight up Mrs Middletons oil , then the jarred sweet and sour sauce added.. And into plastic containers for authenticity!

Oh and packet of uncle bens egg fried rice plus a slice of toast loin of salted pork to top the lot off!

I loved it.. And in true takeaway style there was lots left over.. Mrs Fitz likec it too yet not as much! 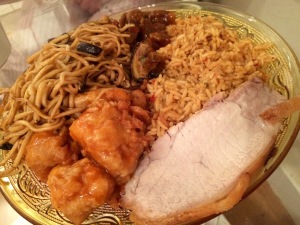 You gotta love fakeaway.. And probably saved a heap of cashola too